Skip to content
Home/Theology Corner/Catholics, Saints, and Statues
Previous Next 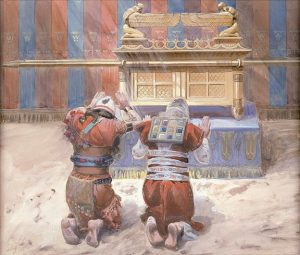 Catholics sometimes are accused of worshipping graven images and breaking God’s commandment, “You shall not make for yourself a graven image, or any likeness of anything that is in heaven above, or that is in the earth beneath, or that is in the water under the earth, you shall not bow down to them or serve them; for I the Lord your God am a jealous God (Ex. 20:4-5). How are we to answer this accusation? Scripture must be read, not just one or two verses at a time, but in context of the book, as well as in the context of the Scriptures in their entirety. Further on in the book of Exodus, God commanded the Israelites to actually make graven images for the tabernacle and the ark of the covenant. Exodus 25: 18-21 reads, “And you shall make two cherubim of gold; of hammered work shall you make them, on the two ends of the mercy seat. Make one cherub on the one end, and one cherub on the other end; of one piece with the mercy seat shall you make the cherubim on its two ends. The cherubim shall spread out their wings above, overshadowing the mercy seat with their wings, their faces one to another; toward the mercy seat shall the faces of the cherubim be. And you shall put the mercy seat on the top of the ark.” God’s plans for the temple, recorded by David and given to Solomon, contain plans for statues. We read in I Chronicles, “for the altar of incense made of refined gold, and its weight; also, his plan for the golden chariot of the cherubim that spread their wings and covered the ark of the covenant of the Lord” (1 Chr. 28:18–19). Additionally, God commanded Moses to make a bronze serpent, and set it on a pole; and if a serpent bit any man, he would look at the bronze serpent and live (Num. 21:8–9).

Why the apparent contradiction in Scripture? Reading Scripture in context helps us see that the Israelites had a problem worshipping other gods. God commanded them not to make these graven images to help keep them from idolatry. Catholics, however, don’t worship other gods (CCC 2110). The first commandment, which we follow, is “you shall have no other gods before me”. We look at a statue of Jesus, for example, and remember Jesus and what he did for us. It would be as if you had a picture of your grandmother hanging on your wall and when you went by it you recalled her and smiled. No one would accuse you of worshipping your grandmother by this simple act. Statues and other sacred art are used ultimately to raise our hearts and minds to God, to aid us in prayer. God becomes angry when people adore statues. Thus, when the ancient Hebrews did start to worship the bronze serpent as a snake-god (whom they named “Nehushtan”) the just king Hezekiah had it destroyed (2 Kgs. 18:4). Catholics follow God’s law; they do not worship statues.

Sometimes anti-Catholics cite Deuteronomy 5:9, where God said concerning idols, “You shall not bow down to them.” Since many Catholics sometimes bow or kneel in front of statues of Jesus and the saints, anti-Catholics misconstrue this legitimate veneration of a sacred image with the sin of idolatry. “Though bowing can be used as a posture in worship, not all bowing is worship. In Japan, people show respect by bowing in greeting (the equivalent of the Western handshake). Similarly, a person can kneel or bow before a king without worshipping him as a god. In the same way, a Catholic who may kneel in front of a statue while praying isn’t worshipping the statue or even praying to it, any more than the Protestant who kneels with a Bible in his hands when praying is worshipping the Bible or praying to it” (https://www.catholic.com/tract/do-catholics-worship-statues).

Normally the accusation of worshipping a statue accompanies the false claim that Catholics pray to dead people. To answer this charge, we once again look to Scripture, in context, which tells God is not the God of the dead but the God of the living (Mark 12:27, Luke 20:38.) Catholics believe that when someone dies, their soul lives on (the immortality of the soul). Saints aren’t dead but alive in Christ. Scripture also tells us the prayer of a righteous man availeth much (James 5:6). Then how much more powerful are the prayers of a person living with God in heaven?! You can’t get more righteous than living with God in heaven. The saint’s prayer is much more powerful than that of your next-door neighbor or of a friend at Church. St. Theresa the Little Flower, ora pro nobis!

Moses and Joshua bowing before the Ark (c. 1900) by James Tissot