The Ascension and the Holy Sacrifice of the Mass 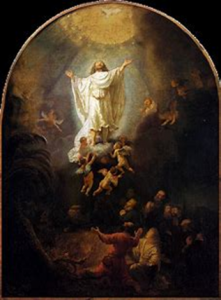 The Ascension of Christ, Rembrandt, 1636.

Have you ever thought about why Jesus ascended into Heaven? Jesus’ Ascension into Heaven completes the Paschal Mystery and is the climax of His earthly ministry. It is from Heaven that He exercises His royal priesthood in the order of Melchizedek, offering Himself perpetually to the Father, both as High Priest and Victim of the sacrifice of the New and Eternal Covenant (Council of Trent, Session 22, September 17, 1562). Christ offers Himself on Calvary, a sacrifice once and for all, at a point in history. Because of the Ascension, Christ takes His once and for all sacrifice on the cross into Heaven and offers it to the Father because of love for us. This most august sacrifice is offered in perpetuity and made present to us through the Holy Mass.

Pope St. Leo the Great (5th century) writes, “Although He be set on the Father’s right hand, yet in the same flesh which He took from the Virgin, He carries on the mystery of propitiation [sacrifice of atonement]” (https://www.newadvent.org/fathers/3604080.htm). The Ascension of Jesus shows that the Incarnation didn’t cease with the Resurrection. The Eternal Word is still united with a human nature and body. It’s in a glorified state, but it’s the same body with the same wounds. Jesus takes His glorified flesh into Heaven such that the sacrifice of Good Friday is perpetually offered to the Father for all eternity on our behalf.

Catholics have been falsely accused of re-sacrificing Jesus in the Holy Mass. Christ’s suffering ceased when He gave up His spirit. The Sacrifice of the Holy Mass is the same victim and same priest as upon Calvary to be sure, but the manner of offering the sacrifice is different. The Holy Mass involves an unbloody sacrifice because it is the glorified Christ now offering the same sacrifice on the altar as He did on the cross. Catholics correctly believe there is only one sacrifice, that of Calvary, but that one sacrifice is brought into eternity through the Ascension so that at every Mass, we participate in the one sacrifice offered in the Heavenly Temple.

The Ascension is the link between the earthly Good Friday and what comes to us today on every Catholic Church altar. Sacred Tradition and Sacred Scripture attest to this.

The Catechism of the Catholic Church teaches:

In the liturgy of the Church, it is principally his own Paschal mystery that Christ signifies and makes present. During his earthly life Jesus announced his Paschal mystery by his teaching and anticipated it by his actions. When his Hour comes, he lives out the unique event of history which does not pass away: Jesus dies, is buried, rises from the dead, and is seated at the right hand of the Father ‘once for all.’ His Paschal mystery is a real event that occurred in our history, but it is unique: all other historical events happen once, and then they pass away, swallowed up in the past. The Paschal mystery of Christ, by contrast, cannot remain only in the past, because by his death he destroyed death, and all that Christ is—all that he did and suffered for all men—participates in the divine eternity, and so transcends all times while being made present in them all. (CCC 1805).

For Christ has entered, not into a sanctuary made with hands, a copy of the true one, but into heaven itself, now to appear in the presence of God on our behalf. Nor was it to offer himself repeatedly, as the high priest enters the Holy Place yearly with blood not his own; for then he would have had to suffer repeatedly since the foundation of the world. But as it is, he has appeared once for all at the end of the age to put away sin by the sacrifice of himself (Heb 9:24-26).

What is often forgotten is that the earthly sacrifice of Christ, which He began in the Upper Room and completed at Calvary, doesn’t cease there. Through His Resurrection and Ascension into Heaven He brings His body into the heavenly sanctuary, presenting Himself as a timeless, eternal offering to the Father. The Mass, therefore, properly understood in light of the Ascension, is not a re-sacrifice of Christ. It is an earthly participation in the one sacrifice of Calvary, now in eternity through the mystery of the Ascension, a sacrifice which is offered through the ministry of the priest who shares in the one eternal priesthood of Jesus, our High Priest in Heaven. Because the Mass is the renewal and perpetuation of the sacrifice of the cross, the very merits that were gained at Calvary are dispensed at every Mass.

The Venerable Archbishop Fulton J. Sheen’s description of the Holy Sacrifice of the Mass is awe-inspiring. He writes, “Picture then the High Priest Christ leaving the sacristy of heaven for the altar of Calvary. He has already put on the vestment of our human nature, the maniple of our suffering, the stole of the priesthood, the chasuble of the cross, Calvary is his cathedral; the rock of Calvary is the altar stone; the sun turning to red is the sanctuary lamp; Mary and John are the living side altars; the host is His body, the wine is His blood. He is upright as Priest, yet He is prostrate as Victim. His Mass is about to begin” (Sheen, Calvary and the Mass: A Missal Companion, New York: P.J. Kenedy & Sons, 1936, 7).